One touch of nature makes the whole world kin...

…Whereas our window on the universe is often mislaid in survival living, sympathetic wooden sculptures remind us through the tree of the larger spheres of life.

lost in the forest, as a child exploring, small hands, rough, smooth, roots to leaves, marvelous bark. Cut to the radial life written in rings, grain and texture, knots and whirls of colour, randomly pleasing.

Shaping and turning, exploring the text, expressing the presence of this life, the grace, strength and beauty. Presenting these pieces as our reminder of the rewards of slowing down to seasonal pace, of enjoying time out, bringing the forest home.

Found Osho as a spiritual master in 1983, so a meditative life arose then.

Since that time have spent four years in several communes dedicated to sharing his vision, in Europe and India. Then more years traveling through West Europe, settling again in Scotland many years ago and since 2003 in The Lizard, Cornwall.

Hence what influences my art is nothing, the void, emptiness, silence, death, and how to allow such presence amid the myriad forms of life. We tend to choose those forms that cloak and disguise such awareness. Meanwhile, the door of Nature is always open, life and death one inseparable whole, and wood has become for me a many levels mirror of my dance.

For me creativity arises out of meditation, and art is the expressive play of form with that which is formless. Thus the highest art form is in allowing oneself to melt into the formless, to disappear as a someone.

In this view the ‘form’ of artist is the fool dancing on the edge of the abyss, just a last game before disappearing, another play at being something, anything, awhile longer. There is no meaning to be sought in such a play, it is more an invitation to share a dance, take a chance.

If trees must become WOOD, in mere remembrance of their mighty dance, and on their way back to soil, then STONE too is a solidifying from incandescent fire to lumpen land, all in yearning to be clay and plant food minerals, to become the apple for your lunch. Sculpture interrupts this process of return, holds them in form for a while. The materialist who denies the architect of all this is right inasmuch as it is so marvellous already we must already be in wonder at life. How it has arisen. The very matter has journeyed so far to know itself as conscious.

Perhaps we must each write our own story, dance, or paint our own version of life as we find it.

METAL is different than wood or stone, it is more in the hands of the creator to decide the form. Of course metal has its material limits too and its long history of use, but somehow imagination is freer. Visiting the foundry at Hayle to see white hot metal poured into my hollowed mould, the success of the idea hangs entirely on my imagination. However, until taking responsibility for the one I find myself to be communication is only as my unconscious expresses itself.

In sculptural terms form exists, only because of space. There may be a million possible forms in imagination that never make it into the light. This is the same start point for self discovery. To be fresh made every day needs space around, from all one’s fixed ideas, and all the mental furniture from others.

Strangely the creative process also begins with nothing, with emptying out.

Of course its challenging, empty as if forever is like a dying process, a winter of self. Easier to pluck some readymade idea, like a hare or a horse or a heroic human, job done. Or choosing to be someone, be someone, anyone, rather than no one for a moment, and risk finding yourself on the other side of conception looking in.

Perhaps the deepest of oneself can’t be chosen but only discovered, and then, who else can you be but yourself? Some aspects undo easily, others are a lifetime’s work, still ongoing in the twilight.

A sculptural form then is a balance of form and space, a communication from the sculptor. A bigger horse does not mean a better idea. Not all ideas are easily grasped. Simple is not the same as trivial.

This 360 tour will allow will allow you to explore Samvado’s Woodstudio and enjoy his creative workspace. Use your mouse to navigate, zoom and look around in all directions. Use the white targets to move to next space.

Click the image below to launch the virtual tour 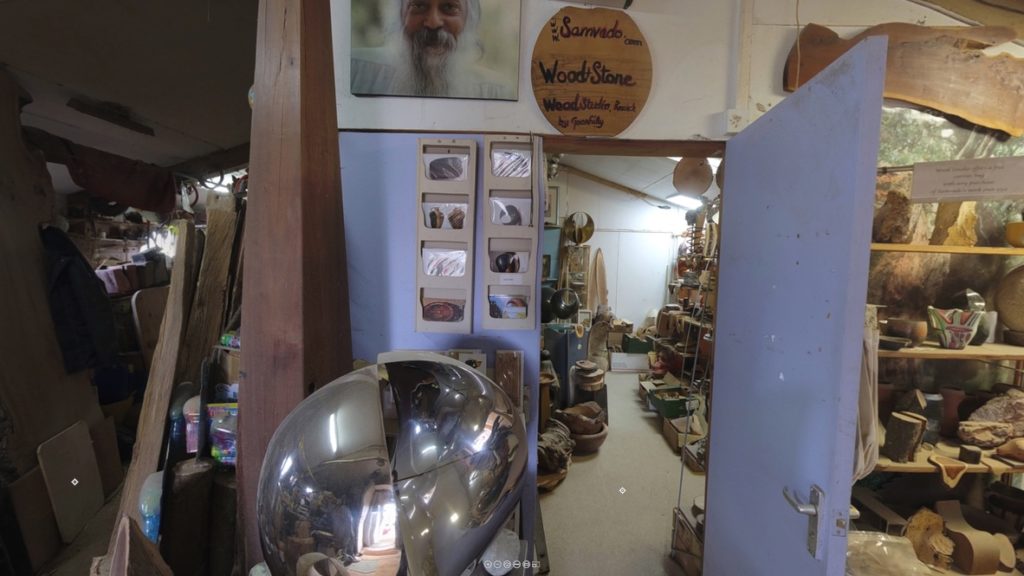